The Power of One

So I was thinking today about the whole congestion pricing debate going on in New York (yes I am for it, in conjunction with citywide market rate parking and transportation improvements) and about the politicians who are opposed. Frequently the argument is that it would hurt their low and middle income constituents, which is a statement studies don't support (http://www.transalt.org/newsroom/releases/115, http://www.drummajorinstitute.org/library/report.php?ID=52).

And then I imagined talking to one of the politicians (I'll pick Anthony Weiner, because he's reasonable. So reasonable that he has been the closest to making me second guess congestion pricing), and asking, "Do you really believe that? I mean, have you actually taken the time to go around and talk to them?" and I thought about talking to Letitia James (my rep) and being able to say that I could name the people on my block who support it. And those I know who might be opposed, well I could just talk to them and maybe change their minds. 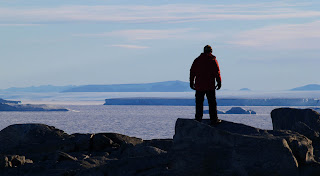 And thinking about that reminded me of "the power of one" - the ability of just one person to make a difference. The idea that if we each go out and have conversations with our neighbors, if we engage one-to-one then we really can make a difference. The "power of one" is a really powerful tool that is so often overlooked by political and environmental campaigns. Sure a big rally can motivate a lot of people - but aren't the people showing up already the motivated ones?

I hope to keep working with my artistic practice, on realizing the power of one. One investigating and expanding our own particular powers to make a difference.

Image courtesy http://www.sethwhite.org/ through whom I plan to live vicariously for a little while....
Posted by esm at 08:39 No comments:

When you work on projects that involve a lot of mapping, you learn to love mapping tools. There may be better ones out there, but I have grown fond of Community Walk. I just used them to do a quick map of the Highbridge project, I See You in Me (The Path of Water in NYC):

I did it mostly to get a guess of how long the project will need to be, about a mile. Sure after a more than 70-mile long project, it seems easy, but this one is a little more work intensive...

More images/information on the project.
Posted by esm at 19:09 1 comment:

I've talked before about the collective power of artists and why we should share. I've been seeing it repeated on Sellout and in the comments over there recently too. (Basically it is the idea that by sharing resources and knowledge we can actually create a greater wealth of opportunities and resources). In light of that, I was trying to figure out the best way to share those resources with one another. Of course a forum seems like the obvious answer - but that can easily become unweildy and devalues quickly. (It would be hard to replicate the success of chow nee chowhound). 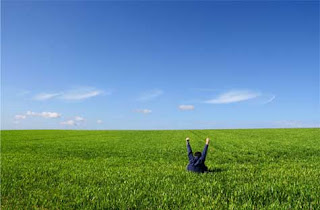 I will start by offering what I know here in these pages...
I will start with the basics, some good places to get reference materials-
Anyone know of others I should include?

Note to self, other posts should include: grant writing tips, making sticky websites, the theory of becoming an expert, online fundraising...

In trade, anyone know a financial planner who works with artists (needs to know our particular situation) based here in NYC?

Found the image on: http://www.business-improvement.org/.
Posted by esm at 19:23 No comments:

What ever happened to smart art?

Don't get me wrong, there are some really smart and clever artists working out in the world, and I really like a lot of what I see.

But last night I went to see the Agnes Denes lecture at the Drawing Center and found out just how complicated her work is. She was "making the invisible visible" by using math, symbolism and structure to investigate human relationships. That all sounds really simple until you hear her explain it. I think about the other big things that artists were investigating in previous generations, and it all seems to be heavy on the the thought and, well, conceptual end. I'm not saying that climate change, or human emotions or other topics aren't big, we just don't seem to present them in the same manner. 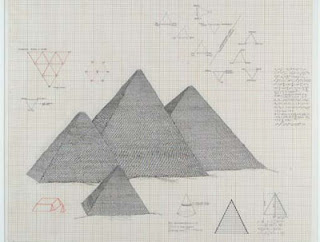 I was thinking that maybe this is because those artists who came before us, already broke it down. They erased the barriers between art and math, science, philosophy, psychology, etc., so that basically we don't have to go to the trouble of adding all the language on top of the work. We move fluidly between lots of different circles of study because the bridges between them already exist. So what is the new frontier, what hasn't been done?

I'm most interested in creating interactions between web 2.0 and artistic practices. How can they inform one another and use one another. I know there are lots of other artists out there doing this, I'm certainly not claiming pioneership (in fact I am probably a little behind the times), but I do think it holds the most interesting exploration opportunities. 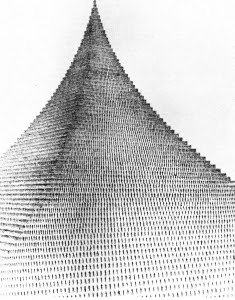 Just think what Agnes Denes (and her little man pyramids) could do with social networking.

Good quotes:
"thoughts are like crystals, one builds off of the other"
"art as an incubator of disiciplines"

I also really was touched at how she referred to the works as "my" wheat field and "my" forest. And hearing her talk about the beauty of the wheatfield was so moving.

Apologies for the more rambling and incoherent nature of this post (more than usual) - I have the "I feel woozy and incoherent" head cold going around.
Posted by esm at 15:13 No comments: