Being in love with the crazy 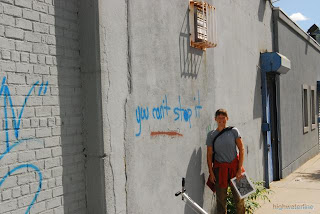 Last week was kind of a nutty week. I was part of a group show opening at Nelson Hancock Gallery in Dumbo, Topos : Brooklyn, showing images of the HighWaterLine project. All very great there were some really interesting projects/images there, including works by Tim Connor, Rebekah Farley, Michael Iacovoni, Michael Itkoff, Michael Piazza, Michael Simon, and Torrance York. Here's where th crazy comes in, for some reason I had in my head that the opening was this week. So when I talked to Nelson and found out otherwise, Ed & I switched into overdrive to get things figured out. We met Nelson on Saturday morning to see the space and work out what we were going to show. We came up with the idea of doing a 3 1/2" x 170" scroll of many images (37) from the project. I also wanted to put up maps of the upcoming weekends - there were three weekends still to happen after the opening - and then replace the maps with images after the weekend's drawings. Nelson loved both ideas, so we were sent off on our way to get it done and back to them by Wednesday morning for installation.

Saturday afternoon I had made plans with my friends Peter & Cecile to go see the Mike Nelson "A Psychic Vacuum" at the Essex Market (courtesy of Creative Time). It was a good break to take - the installation is fantastic, and really does play with your psyche - time, space emotions are all in there. And I really loved the last space. I won't spoil it, just go see it. It is open until October 28th. 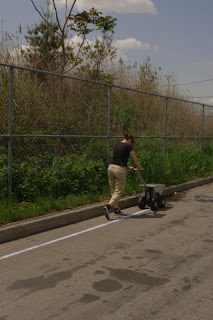 So Saturday evening/Sunday morning I had to sort through all of the photos and pick out about 40 that I wanted to use. Then I met at 10am on Sunday (yeh, I have no weekends anymore) with Ed to pick out the final images and get them in order. I also was making cd's of a bunch of images that I hadn't yet gotten from Ed. Around 1pm I ran home to eat some lunch (and see g-pup, pup-pup and puppykat). Then back over to the studio to meet with our color corrector/printer, Taylor. He and I worked out the schedule to get things back to the gallery on time. The cd's I was trying to copy at the studio were also taking ages to copy. So I left them copying to come home for dinner, then went back to finish copying them. Around 9ish I came back home and sorted through the images and pulled them into photoshop to put them in strips to pass off to Taylor by Monday 9am. So I stayed up until about 1:30am getting it all in order (with the help of g-pup). Woke up the next morning nice and early to walk pup-pup to get myself into the city by 9am to pass off the disc to Taylor before heading off to the day job.

Taylor worked some serious magic on color correcting the images and was ready to review them Monday evening. So I was over in the studio again with Ed & Taylor getting the images in order and ready for the final print. We were supposed to finish the printing that night, but ran out of paper at about midnight! Tuesday Ed got more paper and was going to print the scroll on his printer that evening. Around 7ish he realized his printer wouldn't print something as long at 170" (some epson thing), Taylor was at the photo studio where he could print something that long, but didn't have the files. I ran over to the studio, burned a disc, jumped on a train and headed into the city to hand off to Taylor at about 10pm. Taylor stayed up late (again) getting two prints off for me. I came back into the studio Wednesday morning at 9am and picked up the prints (thanks to Gerard for his help too) and delivered them to the gallery. Whew. 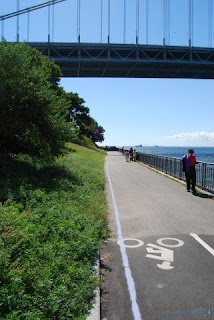 Then Thursday I walked over 14 miles to do the chalking out on the shore parkway. Then took a shower and ran over to the opening. Friday I was up early to do the chalking in Sunset Park Industrial area, then back to the studio, where I was on the phone with the Parks Dept to get the permit in order for Sunday (they had lost the application, but thanks to Eddie & Nancy in Special Events, they got it worked out for me). I ran up to Litchfield Villa, then back home again for a shower and heading into the city for Cynthia's opening and the preview of the Canary Project images. 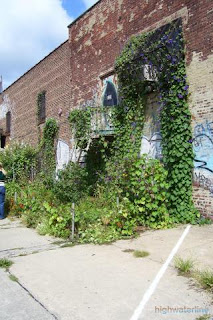 Again on Saturday an early morning out chalking in Gowanus - it was a gorgeous day for it after the rain moved off. Then jumping on my bike for a windy ride over to the Conflux Festival for the Eyebeam Eco-Visualization Challenge Panel. Where I had the joy of sitting on a panel with some pretty smart, clever and creative people: Amanda McDonald Crowley, Tiffany Holmes, Michael Mandiberg and Brooke Singer. From there I jumped back on my bike to head into Union Square to help my friend Steve with his project, Ronald's Crisis. Back home (great day for a bike ride over the Williamsburg Bridge) to upload images and blog about the weekend. 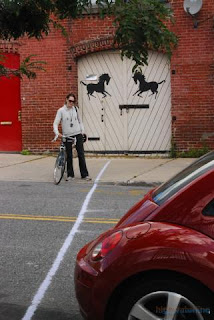 Sunday another early start out finishing the chalking in Gowanus, joined by my friend Margo, who biked from Washington Heights to South Brooklyn (I love you!). We chalked and then had a fab lunch at the Red Hook soccer fields. Peter and Hose came out to help and document respectively, the installation at the soccer fields. With the help of the kids in the area, I installed the beacons. Which, you should know, consists of carrying the pieces (base, beacons, spikes, flashlight) to the site, laying them out, putting them together, hammering the spikes into the ground, then filling each with 1/3 gallon of water, and cap them all. It's not at all a short task and can be physical. We spent about 2 1/2 hours installing them all (and having 3 broken in the process - no big deal I had 50% overage made, thanks to a suggestion years ago from a prepator who worked with Chihuly who regularly brings 15-25% overage for breakage during installation). After photographing them, I found out the people I thought were coming out that afternoon to help out, weren't going to make it. So I was stuck. I had more chalking to do and it was going to be about 3-4 hours to dark. In Battery Park I was okay to leave the beacons installed while I chalked, but Red Hook was a much more active area and leaving them unattended wasn't going to be a good idea. So, I de-installed them (I know, crazy). Then Hose and Peter left and I did a few more blocks of chalking in Red Hook. Then I went back to the studio to unload, then back to the house to unload the beacons (they live in the apt right now) and pick up g-pup who was going to help me re-install a handful of beacons for the night time portion of the project. So I went back out, re-installed and photographed again. Luckily there was a group of girls who were there during the day that were still there. They got to see the installation at night, and really loved it - having them huddled around the beacon totally made it worthwhile to have come back out to reinstall. 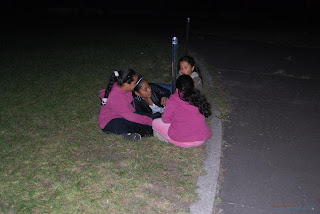 Sunday night and Monday were spent uploading images and updating the blogs and websites. Monday afternoon I met Cecile again to try to go catch Stephanie Skaff's street performance, Make Me One With Everything. The performance on Monday had been canceled, so we couldn't find her. (I am going to try to catch it again this morning on my way into the city - after dropping off packets at Nelson Hancock and visiting BBPark to site the beacons).

So this is a REALLY long story to explain one thing - when the crazy is about something you love, then you even love the crazy. I was writing an email to someone this morning outlining the upcoming weekend's work and realized that there will be a couple more crazy days coming up. I paused to think about it and it got me a little excited (despite still being tired from the recent crazy). I really really love creating the projects, I love doing my art, even the crazy. If you don't love what you are doing - then why are you doing it? Do the things that make you crazy but only if you are in love with that crazy. I am in love with my crazy. (Can't wait to spend some time in studio though too!)
Posted by esm at 08:32 No comments: 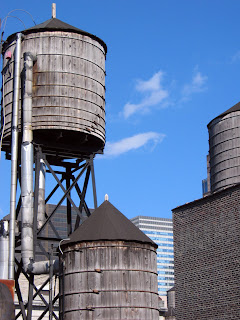 Where I work I have a great view (if I turn around and strain a bit) of a lot of NoHo, East Village rooftops. From here I can see the buildings dotted with water towers. I love water towers.

One day when I was looking at the roofs while contemplating the Green Seeds project, I thought - whoa - wouldn't those water towers look great swathed in green? It would be so cool to turn them into vertical farms. Heck Rachel Whiteread cast one in resin, why can't I turn a few of them into community gardens?

I had developed a proposal when I was in SF called the Vertical Community Gardens, or VCG's. The idea was to create a superstructure that could be hung in place of the advertisements on the buildings of walls (in SF they are low, at eye level) and maintained and used by the communty. 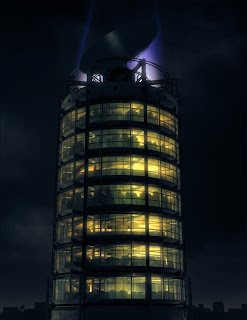 This is an offshoot of that, only it would be used by the people in the building. I was reading on the Vertical Farm site about their urban farm projects. Maybe they would help build a flexible ultra lightweight water tower superstructure to use as small starter projects. There are three right on the corner of Houston and Crosby that I would love to do. And hey I can see them from my office window!


On another note, if you haven't already, go see the Mike Nelson Creative Time project, A Psychic Vacuum, in the old Essex Market building. It is really hard to explain, but the psychology of space, place and time is really played with here. Spoiler alert -- the last space is quite extraordinary, particularly after having been through the maze of other spaces.

Images (from top to bottom) courtesy of: City Noise, Vertical Farm - Design by Chris Jacobs.
Posted by esm at 10:10 No comments: