Been hearing a lot about the Pixar show at the MoMA. And granted I haven't felt any desire to go to the MoMA since I returned to NYC about 6 months ago, but it is ruffling a lot of feathers in the "art world." 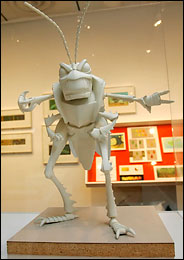 I just read the Modern Art Notes post in reaction to Roberta Smith's "review". But I have to say that I am not entirely convinced. Yes, I would rather see more artists in the museum than corporations, but I agree with Smith (reluctantly) that it is part of the museum's purview to examine the visual items (including product design, fashion, etc) which inhabit our culture. Wouldn't it therefore make sense to investigate something as pervasive as blockbuster films?

Maybe the mistake is selectively showcasing a single corporation (which Smith touches on briefly) within the world of digital animation, perhaps the "community" would be better served by including other CG filmmakers (Disney, Dreamworks, or hey what about some independent animations!) or a look at all alternative blockbuster film types - they could have coincided with the Wallace and Grommit popularity by including Aardman Animation. 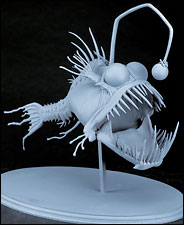 So perhaps Smith is right, the lack of a catalog doesn't help the MoMA in its justification of showcasing a corporation's (a single corporation)'s output. Put it in writing, tell us (the uninformed public) WHY Pixar is an important thing to view in the hallowed setting of the MoMA. Putting something like this in the MoMA imbues it with some kind of visual cultural importance, tell us what that is, or at least begin the dialog...

Don't get me wrong, I don't really support this kind of thing, and I won't be going to see the show, but I haven't seen a convincing argument as to why this is so wrong (other than my theory on the lack of diversity)...

(off topic: I have a lot of articles bookmarked to read and comment on, and I have updates to post on work in progress, just been awfully busy - getting some work done and re-photographed my portfolio - thanks Peter! Hope to catch up on things this weekend).
Posted by esm at 09:59