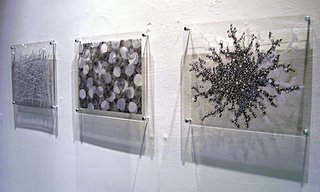 Most people who know me, know I like a challenge. Whether its a killer physical workout with mental challenges, a good debate on a political topic, or an impossible artistic task. I enjoy learning about different sides of a story, I enjoy having my preconceptions challenged.

Thats why I recently applied for an 'assistant curatorship' at Exit Art. . The hours were perfect (part time, with additional time for specific projects), and the requirements seemed like a good fit for me: works well under pressure, dynamic fast paced environment and a need for multi-tasking capabilities of the highest order. Believe me, that all describes my work style to a T. 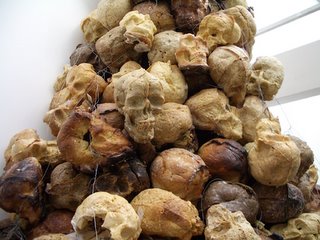 Here's where the challenge comes in. A lot of the programming is not something I would have chosen to do. Don't get me wrong, they have also hosted some of my absolute favorite shows ever (see below), but a lot of the shows are, well, challenging. And I like that. I don't want to go out to galleries and just see stuff I already know I like - what fun is that?

I go to lots of galleries and see lots of shows to be able to give my brain a little excercise. Thats why I thought this would be a great job. It would allow me to see more of the process involved behind the scenes in putting together a show like that and I could be an integral part of staking its claim. I think it is really important to present a varied palette of works (Exit Art does that probably better than any other NYC institution), and to also present well thought out reasons for presenting said works. Well, so thats why I wanted the job. If anyone knows anyone who knows anyone...

So the shows I liked: 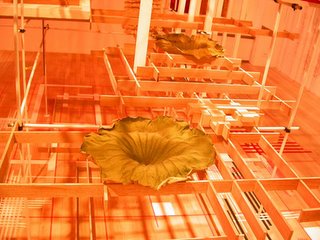 The Garden of Sculptural Delights: This show in 1994 happened during my grad school time (first time around, and, um, yeh, that dates me). One of my professors, Gillian Jagger was participating, but there was also work by Ming Fay, Petah Coyne, Judy Pfaff and Roxy Paine among others. It was really fascinating. I think it had a great and lasting affect on me, even though I may not have realised it directly at the time. I remember having gone back a couple of times and wandering through the fascinating (and huge) installations of gorged, morphed and multi-colored organic mutations. These artists are still favorites, and the show was incredibly unique for its time.

Sweat!: This was a fascinating show because a lot of people I was in school with were in this show: Lynda Abraham, Jeff (Jeph) Gurecka, Heather Stephens and Jeff Wyckoff. It was a disgustingly hot summer and the show explored the idea of escape. This manifested itself in a variety of ways, including fantastical, ritualistic, and tribalistic. There were always lots of people just hanging out too, it was like an urban sweaty Caliguan party...

The Studio Visit: This just ran for the month of January. The show explored the artistic environment through the medium of video and onsite studio spaces. I thought this was a fascinating idea and interestingly presented. I have always enjoyed open studios because it lets you get a look at the inner mind of the artist. You can get a glimpse of the things that the artist collects as interesting visual objects, it is like seeing inside the womb from which the baby was born (but not gross). It makes me think of the seminal photographs of artists in their studios. I find that having some non-text background to the work is really important to understanding the work.

So maybe they are just slow in getting back to me, and I will be working for Exit Art before too long. Let's hope, because everyone needs a good challenge.
Posted by esm at 13:00