What do I know anyway? 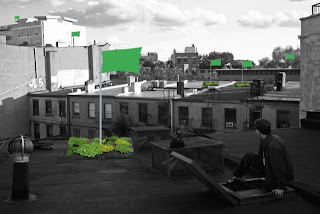 That's just a throwaway title. I couldn't think of anything so I put that in there. But in a way it kind of leads into what I wanted to talk about.

First though, let me say that I haven't been posting lately because I haven't seen or done a lot. Well thats not true, its just maybe not that interesting for blogging other than sort of a social calendar or something like that. So I have been rebuilding my website (which is why I am feeling antsy with the look of this blog and keep playing with it - none the less it will all get fixed up all nice when I finish the site - it is very nearly there), and I have been writing more grant applications, which is a total time suck. Write me if you want all the gory details.

Anyway, I have been talking to a lot of people about the two projects - the green roof project and the bus shelter project. Most people are pretty into it. But once in a while (and this happened with HWL too) I get a nay-sayer. It's not that they are trying to be negative. They really just want to help or to ask questions about the project (all well and good!). But I think I would prefer someone who comes with ideas instead of just problems. I met with the native plant botanist at Brooklyn Botanic Gardens (love that place) the other day. He had some concerns about the types of plants that could grow in "nutrient poor, limited water, exposed" situations like the proposed projects. But instead of tell me how it wouldn't work, or list all of the obstacles, he suggested that I look at coastal plants as a good option - cool! - I love that idea!

Thats the kind of can do attitude that will move us all forward.

I had some other stuff I wanted to say, but I have been waking up kinda early lately, and going to bed kinda late so I can't remember much. Will try to get back in the habit of posting about the life and habits of an artist.
Posted by esm at 16:07